An Introduction to Terraform 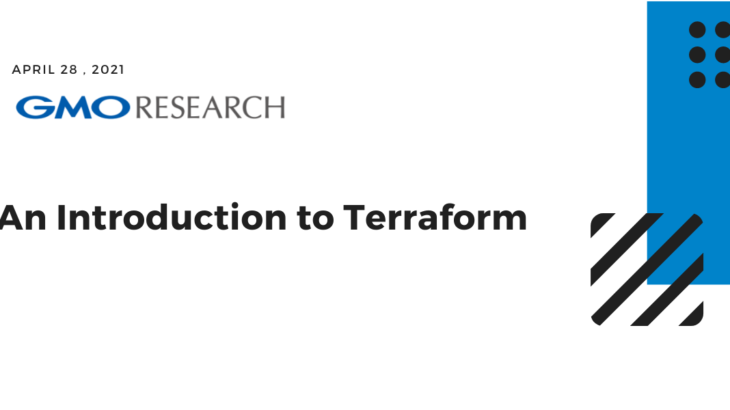 Hi, I am Niekis Aurimas, and I am a System division leader at GMO Research. I have been working for GMO for over a year.

I was born and raised in Lithuania, but I lived in Germany and the United Kingdom for a few years before moving to Japan last year before CODID-19.

Since last winter, I have been working on a new project structure at GMO, which would include all the latest technologies and practices for our new and old projects to be based on.

For this article, I decided to introduce a tool called Terraform.

Terraform is an open-source infrastructure as a code (IaC) software tool developed by HashiCorp. It allows users to define and provision the complete infrastructure using a simple and easy-to-learn declarative language.

It is an infrastructure provisioning tool with which you can define infrastructure setup as codes. There are many alternatives that provide similar functionality, such as Saltstack, Pulumi, and many more.

What are the benefits of using Terraform?

There are a few core concepts and terminologies used in Terraform:

Terraform has two main components that sum up its architecture:

Terraform core uses two input sources to do its job.

The first input source is a Terraform configuration that you, as a user, configure. Here, you define what needs to be created or provisioned. And the second input source is a state where terraform keeps the up-to-date shape of how the infrastructure’s current setup looks.

The second component of the architecture is public modules, aka providers for specific technologies. This could be cloud providers like AWS, Azure, GCP, or other infrastructure as a service platform. It also can be lower or higher-level components such as VMware vSphere or Kubernetes or other software or service like GitHub.

It gives you the possibility to define your infrastructure on different levels.

To wrap up, the Terraform is a universal tool that can be used from enterprise-level companies to low-level home projects. It would take many articles to explain all possible use cases, but I hope my introduction at least helped to understand the core idea of the Terraform.